give yourselves a big huge round of applause ♥JINGLE BELLES♥ and take some extra heart-felt thanks from myself and stephanie! because not only have you helped us raise $75* dollars for the susan g. komen foundation--which is utterly awesome--but also, we think you've done some of your BEST WORK EVER! some folks looooooved the pink and others not so much... but everyone ROCKED this prompt in a big way!
here are a couple of especially creative cards that caught our eye this week: 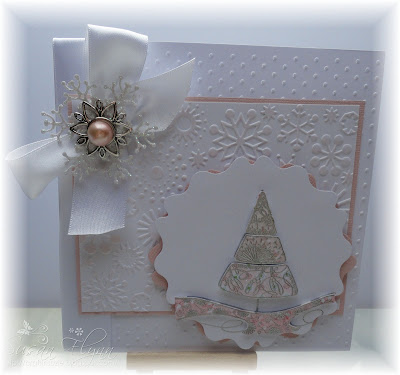 Susan Flynn of Craftin' Suzie
added the merest hint of pink, as an accent, to her completely glamorous and ethereal white-on-white masterpiece! 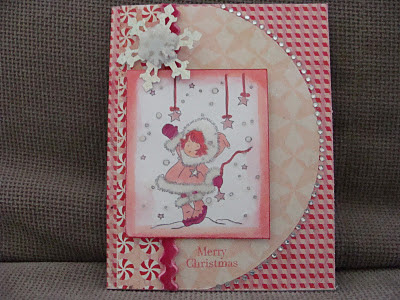 Deena of A Deena Card
used multiple shades of pink--plus lots and lots of texture and sparkle--in her clever and classy monochromatic confection! 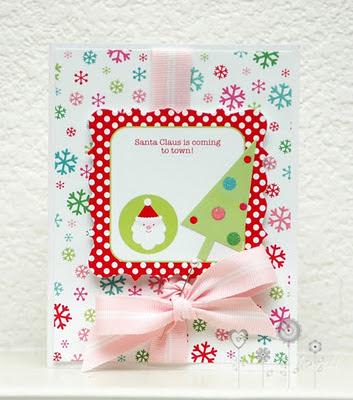 Ashley N. Newell of Heart Hugs Designs
used pink with lots of other brights in her utterly fresh and appealing holiday card!
in other news, your hostesses (lauren and stef) were hard at work in new york city this week! here we are at our favorite shop, the ink pad, gathering inspiration--and a few new supplies--to better serve you in the weeks to come: 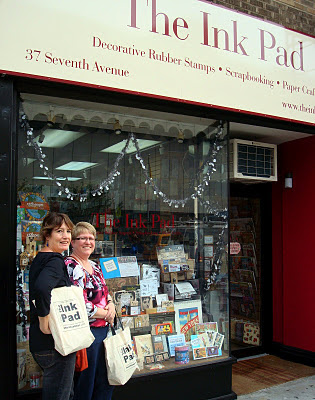 many thanks to anna, michael and jane for their assistance, advice and serious patience during the taking of photos! because it took quite a few shots to get the one above. mostly due to the fact that ONE OF US (the one who's not called stephanie, lol!) nearly always closes her eyes, opens her mouth, or freezes like a reindeer caught in the headlights of santa's sleigh when a camera is produced. or all of the above, as proven in this outtake: 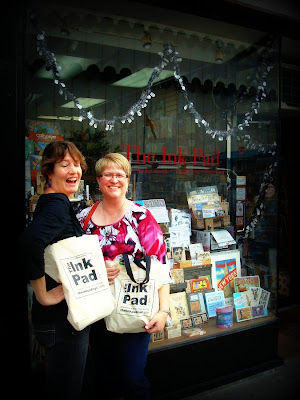 thank you again for jingling along with us in a really good cause this week, we could not be more proud of the results, both aesthetically and financially! tune in at midnight for the new prompt which we hope will put a song in your heart! ♥

Lauren, you are hilarious :)

Congrats to Susan, Deena, and Ashley (and all the Belles) on their lovely PINK Christmas card inspiration.

Thank you, Stephanie & Lauren for your generous donation for the cure!

so excited that you guys chose this kind of a "fun"draiser...excellent idea and cause...looks like you are having a great time on your vacation!

yahooooooo.....that was a brilliant idea with the fundraiser...way to fun and seriously, who wouldn't LOVE a pink Christmas card.

Can I tell you I LOL'd about the picture taking situation?! Lauren, you crack me up!

Congratulations, ladies! And L & S, you two are hilarious. That store looks yummy, too! :)

Beautiful choices! Thanks for making that donation ladies - how very wonderful of you both. Lauren - congrats on winning at the Ink Pad too. Your card is gorgeous!

You two are such a kick ;) love your gorgeous picks & now I want to go to NYC to visit that store! Sorry I've missed this fabulously PINK challenge! :)

Great cards - congrats ladies. And you two look like you're having such fun!