it's always nice to kick off a new venture with free stuff, don't you think?! so we've put together a little prize pack full of christmassy supplies that one lucky winner will snag on january 31st! just the thing to help you kick off a whole year of holiday cardmaking! would you like to see a photo? 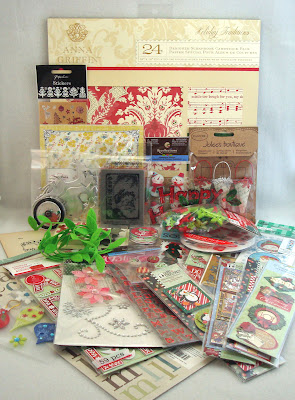 ok, so it's not a *good* photo...but that's mostly because there were too many things to fit comfortable in my light box! ;) but hopefully you at least get an idea of what's up for grabs.

HOW DO I GET THIS STUFF??!?!
it couldn't be simpler: we'll collect entries the entire month of january; you get ONE entry for every comment you leave on any january jingle belles post. you get TWO entries for every *new* holiday card you link up to a january jingle belles prompt. on february first we'll announce the winner and one lucky jingle belle will walk away with the goodies!
throughout the year our prompts will begin on FRIDAYS...but we're too excited to wait another week, so we're starting out this SATURDAY... new year's day...january first... won't you come back and play?!! ♥
Posted by lauren bergold at 2:00 PM

WOW!! I spy lots of goodies to make some awesome Christmas cards :)

Really looking forward to this year long Christmas journey. And some more Christmas supplies would be sooooo much fun.

What a great way to start this journey. Someone lucky person will be soooo happy!!!

Good grief, that looks awesome! Can't wait to see what you two have cooked up. :^)

WOW. This is way better than the ball drop is gonna be.

A giveaway?! Whoa, and we haven't even started yet! :)

what an awesome idea to start creating cards early! and you know it will help me, the procrastinator :). yay!!! i can't wait. congrats on your new endeavor and have a fabulous new year's. *hugs* steph :)

this will be fun and good therapy. I'm always sad to put away my Christmas stamps at the end of the holiday season

Oh, I like this idea of making one card each week! Brilliant! Your candy is looking mighty good, too!

What a fun way to start a new year and a great way to celebrate Christmas everyday! Great blog candy!-L. Berry

What an awesome assortment of stuff! Would loooooove to play with it all!

What a great stack o' stuff! Thanks for a chance to have it sent to me :)

Oooh, candy...and it's not like you are strangers so this shall be delightful!

I'm so darn excited about this blog!

(you know, the OG and the JB should have some kind of joint challenge themey thingy - that's a technical term I believe) (in the spirit of bloggy comraderie and arty goodness)

What a great idea for next years Christmas! I this is one serious giftie pack!

Best wishes for the beginning of your new challenge. And we'll all be winners!

Oh, a new challenge blog! I will be back to check out the challenges!

I see Anna Griffin papers amongst all that candy goodness....(swoon). I love this, I'll be happy for whoever wins but gosh I sure would be happy if I happen to! (LOL)

You all are off to a great start, lots of sharing around the blogosphere!

This is a great idea! I am glad I found you, but I can't start till January because I am living in transition right now with family while my crafty items are in storage. I have been itching to craft so bad and this sure would help put a dent in those Christmas card projects for 2011~ What fun! Glad I found your site!

Wow! What a great pile of loot for a lucky someone!!! Happy New Year to the Jingle Belles! I hope to play today!

Fantastic goodies! This site will be a wonderful inspiration to get Christmas cards actually handmade in time this year!

What a great prize! Thanks for the chance to be win.:)

so happy I found this site!

So glad I found this site I love to make xmas cards early :)

Oh wow, what a FUN blog this is! Thanks to my blog friend Lorraine M, I found your blog just now! Luckily for me she had it advertised on her blog:-)
I am already inspired so you'll have to excuse me while I go & lock myself away in my craft room & create:-)
Thanks so much!
Sunshine New Zealand
www.ihearttostamp.blogspot.com

Awwww! That's so sweet! GREAT giveaway - pardon me if I drool on the keyboard...? ;D

I can play now that I am nearly unpacked moving within my own house LOL! This is gonna be one of my fave challenge blogs :)

OH MY!!! That prize is awsome!!! Have to get started on Amy's sketch NOW to improve my chances!!!
wish I'd found you earlier!